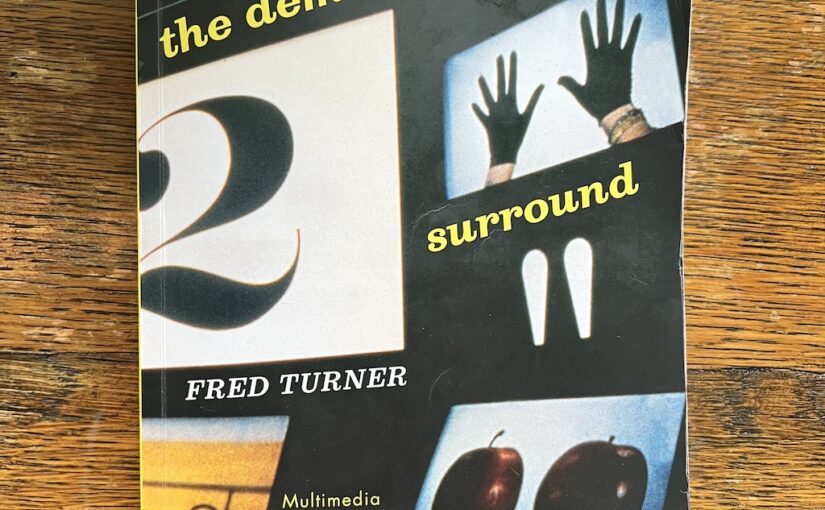 In my quest to learn more about the origins of fascism and modern liberalism in North America, I came across Fred Turner’s books. The Democratic Surround describes how a group of artists and anthropologists during the 40s and shortly after WWII set the ground for the multimedia-rich, consumer-driven world we live in today. Why is multimedia significant? At the time, fascist and communist authoritarian leaders used broadcasting technologies such as Radio and Television to bring about repression and conformity to their societies, and multimedia was an alternative method of offering a more democratic, inclusive, and open social order.

The author shares stories from Bauhaus, the Museum of Modern Art in NYC, and Black Mountain College in North Carolina. This group of artists and intellectuals organized art and multimedia events such as the Happenings and Family of Man, which were interactive, used rich multimedia, and were also heavily fused by propaganda to promote social freedoms combined with consumerism and capitalism. These events eventually set the stage for the psychedelic counterculture and later cyberculture which Turner covers in his next book, From counterculture to cyberculture.

Remember that these multimedia events predate Burning Man or the Internet itself. The Happenings, for example, were mainly organized by white men and offered little to no gender or racial diversity. While nude women were part of the interactive art performances, women, people of diverse sexual orientations, and Black and indigenous people often had little to no involvement in organizing and planning the events.

I still wonder whether a few art events could shift the mindset of a nation from fascism towards some variation of liberalism. Still, I’ve also learned that subcultures and countercultures often have more influence on the mainstream mindset than we realize.

I don’t like Winter; I’m not too fond of the short days. Right now, I was going to get dressed and go to a local cantine where I could have a drink, food, read a book, and people watch. But it’s already too dark to read anything inside an establishment; streets become unsafe in downtown Vancouver once it’s dark for people who walk alone, and I don’t want to go out only to dine on my own while I have healthy food my fridge. So I decided to get back in my comfy clothes and stay home. It’s not an ideal situation.

Happy winter solstice! Did you know that Yalda is the Persian’s winter solstice? Yalda means “birth,” and the Yalda festival is at least 2500 years old. It symbolizes the triumph of light over darkness.

You celebrate Yalda by wearing something red, lighting candles, staying up all night, snacking on pomegranates and roasted nuts, drinking red wine, reading poetry, and reflecting on your existence within cycles of nature and living as one of the many life forms.

Yalda is one of the many ancient traditions that the Islamic invaders and occupiers who colonized Persia 1400 years ago failed to exterminate from people’s lives. As you might know, Iranian women and youth have been uprising against the theocracy of the Islamic regime in their country, and during this Yalda, they are continuing to fight on the streets. So while celebrating Winter Solstice, please keep them in your thoughts.

Happy Yalda, and may light be in your lives!

Update: so TheConversation.com just published this article: Canada’s public broadcaster should use Mastodon to provide a social media service

So the CBC could use the Mastodon platform and build its own server to provide access to Canadians who want social media without the reliance upon predominantly American corporations. Ideally, this could be provided globally as an important service in an age when platform interests and national interests have increasingly aligned.

I think the progressive politicians, news agencies, celebrities, scientists, and pro-democracy organizations must leave Twitter and instead use federated and distributed technologies such as Mastodon or similar technologies to reconnect where no billionaire can do a hostile takeover owning all the data, infrastructure, and algorithms.

Chief twit, Elong Musk, can now sell years of user data to any entity worldwide to pay off his loans. If any democratic government tries to regulate him, he can rig the algorithms against them, so only the political parties in his favour would win elections. If people leave, that will put EM in a difficult financial position, and the entire network will turn into a right-wing echo chamber that will hopefully collapse.

Global news networks shouldn’t be owned by one private company. Ideally, we would want a federated and distributed social network managed by democratically elected bodies in each region, similar to city/school/park councils who can moderate their instances using their local IT resources and following their local rules. The technologies already exist and are open source, but it takes social and political will to protect our democracy.

It’s been 16 days since the uprise against the Islamic regime in Iran when Mahsa Gina Amini was killed at the hands of the Islamic morality police. Women are leading the fight this time by cutting their hair and burning their hijabs!

My thoughts are with the brave women and people of Iran as they are upraising against the theocracy and patriarchy while facing bullets, imprisonment, and torture. I hope one day, secularism, feminism, and social democracy become the foundations of their society.