Here I’ve got a really good book for you. Hackers & Painters is a collection of essays from Paul Graham. He is a Ph.D. Computer Scientist from Harvard University who has also studied painting at the RISD and the Accademia in Florence, Italy. Paul has created the new Arc language, and he has also created the first web-based application in 1996. Being a Web Application Architect and a Visual Artist myself, he could well be one of my idols. I think he is a living example of Leonardo Da Vinci.

The term Hacker is used here to describe skillful Computer Programmers, and Software Architects, and should not be mistaken with Computer Criminals. 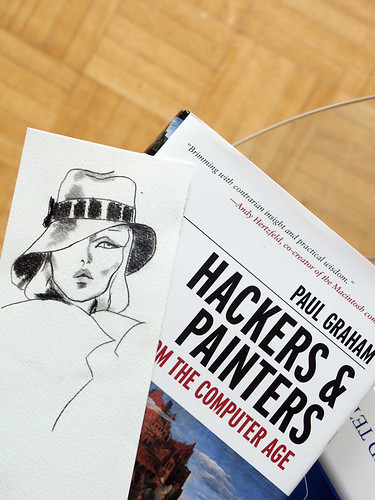 I must say I bought this book only to find out that all the essays are available on Paul Graham’s website for free, so if you have no problem reading a book on the screen you’ve got yourself a deal. I sometimes like the feel of a book, because I can take it to a coffee shop, read it, and look smart to the ladies. A Book also has an index, so you can look up keywords such as “Pointy-Haired boss“!

Reading this book I could tell that Paul is kind of a Nerds Rights Activist. The book starts with the essay “Why Nerds Are Unpopular” and on the Chapter 13 goes with “Revenge of the Nerds“! Paul explains why nerds aren’t willing to give up their intellectual abilities and take part in the High School popularity contest, “I wonder if anyone in the world works harder at anything than American school kids work at popularity” says Paul.

The notion of Bullies Vs. Nerds are brought up in other essays such as “How To Make Wealth” and “The Mind Gap” when nerds realize that there is no fixed amount of Wealth in the world (The Daddy model of Wealth!); meaning that, anyone could generate and acquire wealth. In fact, that’s how Nerds started generating wealth during the Industrial Revolution using their innovations.

Today Nerds quit their corporate jobs, create start-up companies, and using innovating methods and solutions, compete with larger corporations who can only offer fixed salaries to their employees regardless of how hard they work. Paul describes how being small, makes many start-ups more competitive than larger corporations that are bugged down by their operation costs, slow work process, pointy-haired middle management, conservatism, and corporate politics.

In other essays such as “The Other Road Ahead” and “How to make Wealth” Paul describes why he thinks Web Applications are more efficient and useful than Desktop Software. His stories from when he was working on his start-up company Viaweb, before it was aquired by Yahoo, are quite interesting. For instance he explains how using a Language such as LISP gave their small start-up the competitive advantage over many larger companies who have tried to duplicate their ideas.

The essay “Hackers & Painters” makes a comparison between Painters’ and Computer Programmers’ creative process. Unlike what is taught in many Computer Science school programs, Programmers do not necessarily write an organized top-down pseudo-code list of instructions, and then proceed with writing the actual code. In fact , they often spit out bits and pieces of code that somehow resembles what the program is supposed to do, and then the code is gently beaten to the final shape. Just like creating a sculpture from a block of marble stone.

I leave the rest to you, Hackers & Painters is a somewhat provocative book, and a good read in my opinion. I’m sure many will enjoy it.