I would like to thank Vivien from the Inspiration Bit blog for the wonderful interview that she did with me over the skype last Monday. You can read the blog post here: Social Media As A New Way of Doing Business

Thank you so much Vivien!

Zend is a PHP class Library

Symfony and Ruby on Rails are Web Application Frameworks extendible by the Developers.

Joomla! CMS version 1.5 or later is a Content Management Framework (CMF) which is extendible by both the Developers and the Users.

You noticed the evolution pattern?

now go through this presentation!

| View | Upload your own

Imagine a neighborhood where all the door locks come from the same manufacturer. Once the bad guys learn how to break one lock, they’ll be able to break every lock in that neighborhood. (Hey that looks like most condos in Vancouver!)

Now if half of those locks came from two different manufacturers, that means the thieves have to learn two different ways to break those locks. Now imagine if different door locks were using five, six, or seven different technologies, eventually it would be much more difficult for the thieves to rob the entire neighborhood, even though they could still cause partial damage. Partial damage is always better than having the entire neighborhood exposed to the break-in threats.

The same analogy can be used in other ways, for example houses come in different shapes and forms so thieves have to come up with different plans or use different types of ladders to climb up and break-into those houses. Using different material to build houses possibly introduces further challenges too.

END_OF_DOCUMENT_TOKEN_TO_BE_REPLACED

I was supposed to blog about this event last week around Wednesday or Tuesday, but I simply didn’t get the time. We were so busy working on the client projects, that it was difficult to allocate free blogging time. 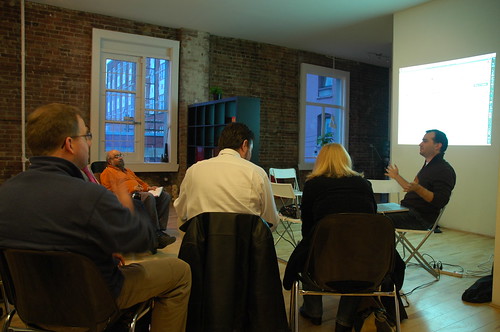 We had around 20 people attending this event at the Network Hub last Tuesday. For this session we managed to construct a simple website for an imaginary Dance and Modeling school (The Broadway School of Dance & Modeling) using the Joomla! CMS version 1.5. We also showed how Joomla! CMS could easily integrate with the other major social media services such as Flickr, YouTube, Google Calendar, and Eventbrite. The idea was to show people how to utilize the power of those great hosted solutions within their Joomla powered websites without having to do any crazy php software development.

END_OF_DOCUMENT_TOKEN_TO_BE_REPLACED

We have been receiving emails on a daily basis regarding the release date of Anahita project.

The reality is that we can deploy it as a part of a commercial social networking project right now, but the packaged GPL version will take a bit longer. We would like to roll it out within the next 6 months or much earlier if possible. I wish I could give you an exact date, but we don’t want to spreadÂ  rumors. I think as it is there are enough words circulating around in the community.

The technology will be available for sure, because it is one of our core products. 😉